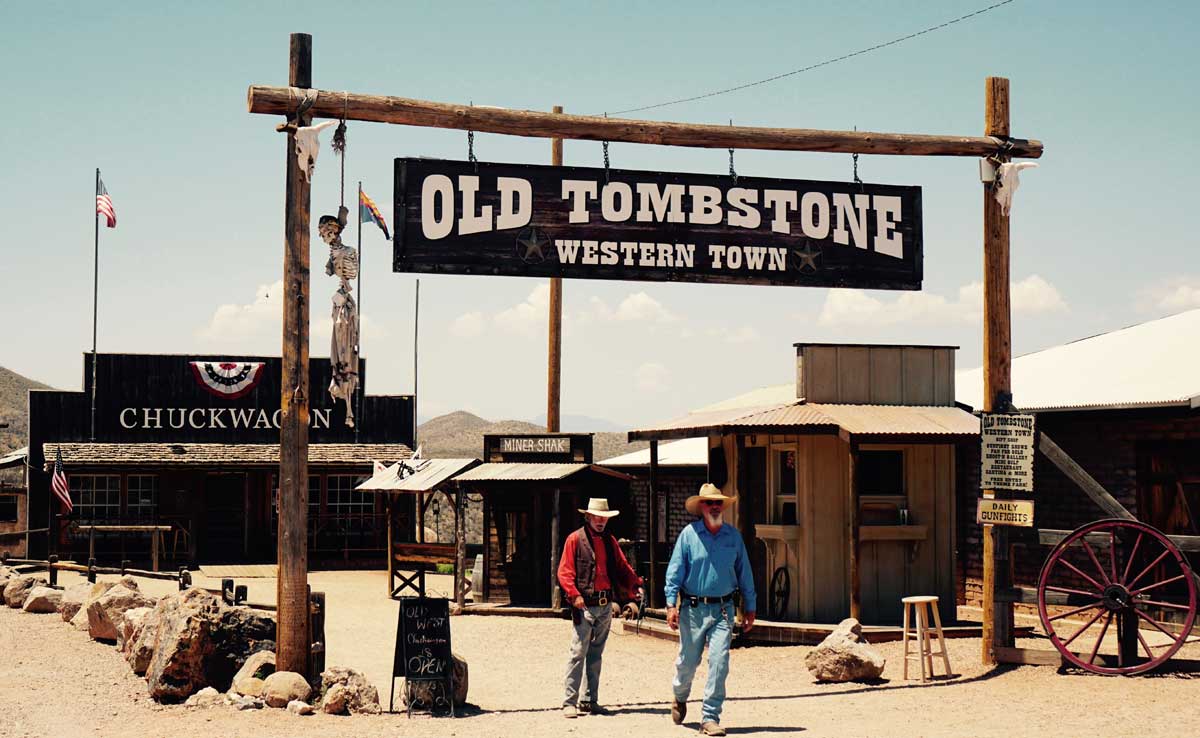 On your tour of south-eastern Arizona, plan to take a day experiencing Tombstone.

This famous mining town of the 1880s is now an exciting tourist destination where visitors can tour a variety of fascinating historic buildings and sites.

Most people identify Tombstone, AZ with the famous gunfight that took place at the OK Corral. You can tour the OK Corral and learn about this gunslinger battle on location on your visit to Tombstone. There is a re-enactment of the 1881 gunfight at the OK Corral daily at 2:00 pm. You’ll see Wyatt and Doc Holiday, Virgil and Morgan Earp fight the McLaurys and Clantons there at the original location.

You will be surprised how fast the showdown at the OK Corral actually was. In about 30 seconds, three men died and two were wounded. Depending on your enjoyment in history, you’ll probably find the story behind the gunfight at the OK Corral even more interesting than the re-enactment.

The gunfight at the OK Corral involves a surprising level of historic disagreement. There is disagreement over who was to blame for the battle and why it took place. There is even argument over the exact date of the shootout, although most historians date the event to October 26, 1881.

Two different Tombstone newspapers took different views in their support of the Clantons and the Earps. Both sides appear to have a substantive amount of area support. There are so many twists to the tale of the feud between the Earps and the Clantons, it can easily become an intriguing focus of long-term study for anyone interested the famous gunslingers.

Tombstone was a fascinating mining town during the 1880s, and it was one of the dangerous towns in the Wild West during its hey-day. Lured by gold and silver, the town was overtaken with an assortment of “bad guys,” including thieves, murderers, and card-sharks. There were hundreds of saloons and gambling houses in Tombstone, and living to see another in Tombstone was considered an accomplishment.

On your stay in Tombstone, you’ll see original, historic buildings containing bullet holes displaying the town’s tougher days. Pay a visit to Boot Hill Cemetery and you’ll see the tombstones of victims and villains, and you then tour local attractions such as the Old Bird Cage Theatre and the Crystal Palace Saloon. The 1882 Courthouse is an historic park and museum where you can see many interesting artifacts and old photographs related to Tombstone’s history.

Many of Tombstone’s historic buildings are located in the area of town bordered by Fremont, 6th, Toughnut and 3d streets. In addition to historic buildings, there is a variety of food options available in town and a wonderful assortment of unique shops and boutique stores for tourist to browse.