The crowd is attracted to sparkling ski slopes of the Alps, sunlit vineyards and sun-baked beaches of this beautiful country. France is a country which draws more tourists than any other country. It is easy to see why this is the case given France’s great reputation for fine wines, good food, high fashion and relaxed lifestyle. But while France is undoubtedly a place to eat and drink till your heart is content, there’s much more to this fascinating country than only cutting-edge cuisines. Spring is the best time to be here, and those interested in winter sports can drop at the Alps and Pyrenees with some polar gear. The summers are very hot and winters are moderate. An all-weather coat and pair of comfortable shoes are a must. Women, especially, should carry cocktail dresses as some of the restaurants ask for it. When visiting any religious site, refrain from wearing sleeveless shirt and shorts, as they are disliked at such places.

English is widely spoken here, although French is the official language. Handshaking is customary greeting and women should be kissed on both cheeks and should be addressed as Monsieur or Madame. French people are popularly known for their like for stylish sportswear and of course perfumes. Nudism is allowed on some beaches only. Social functions, fine restaurants, and clubs call for more formal dressing. When at a formal dinner, wait till the host gestures to start the dinner. Smoking is banned in public places. 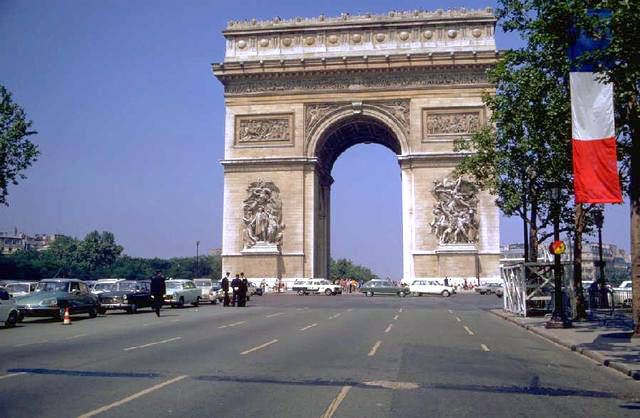 Paris, the city of love, is a massive city with many attractions in reachable distance thanks to the highly efficient public transport system. It boasts of more than 80 museums and 200 arts galleries. A trip to Disney land and the magnificent Eiffel tower will make the trip worthwhile. The attractive tourists spots are the Arc de triomphe which spans over the tomb of an unknown soldier, the forbidding gothic architecture of the Notre Dame cathedral, the picturesque Sacre Coeur, to Leonardo da Vinci’s Mona Lisa, the Moulin Rouge and boat tours along the Seine. Get the Carte Musees-Monuments pass, which gives access to 70 monuments and museums.

Although service tax is included in the bill, a humble tip won’t cost much. An extra dollar can be given as tip to the waiter. A tip of $2 can be left for the bus drivers.
Electricity

The national airline that operates here is Air France. Many low-cost airlines, too, provide services from UK. Paris-Charles de Gaulle also known as Roissy-Charles de Gaulle is the major airport of France, which is 23km away from the city. Coaches, taxis, limousines services are provided at the airport. The railway facility provided by the airport, claims to reach all the terminals within eight minutes. These trains run 24 hours. The other airports that offer flight services are Paris-Orly, Marseille, Bordeaux, Nice, Lyon and Toulouse.

Ferry and cruise trips can be made from ports such as Atlantic, North Sea, Mediterranean, and Havre.

Food and agricultural products should be avoided.