Immensely popular as a tourist destination, Asia provides a peek into a rich history and an even richer culture. In fact, some of the great wonders of the world can be found within the boundaries of this continent.

Travelers to Asia will probably have the Great Wall of China as their first stop. Extending to about 2,414 kilometers or 1,500 miles with a height of about 25 feet, the wall has been said to be visible even in outer space. Erected by the Qin dynasty’s first emperor Shihuangdi to defend the city from the nomadic people, the wall is made out of earth and stone.

Another worthy travel spot in Asia, particularly in China is the Terra-cotta Warriors and Soldiers Museum in Xi’an China, which is considered to be one of the world’s greatest archaeological find. Another tourist destination that should be in the list of any traveler to Asia is the Forbidden City, now known as the Palace Museum in Beijing. The enclosed location holds the former palaces of Chinese emperors. Tiananmen Square, which is also located in Beijing, set adjacent to the Forbidden City. A witness to a series of student-led demonstrations and rallies in 1989 calling for the removal of Deng Xiaoping, the square is now a memorial of those whose lives were sacrificed. Asian travelers will probably want to also go to Dunhang, where ancient Buddhist frescoes in caves can be found. 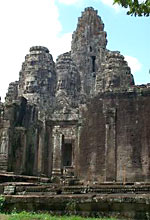 One of the wonders of the ancient world, the Angkor is a major archaeological site located in the northwest parts of Cambodia. Angkor was the site of a series of capital cities of the Khmer empire for much of the period from the 9th century to the 15th century CE. Designated a World Heritage Site by UNESCO, the Angkor Archaeological Park encompasses dozens of temple ruins including the Bayon, Banteay Srey and the legendary Angkor Wat whose artistic and archaeological significance and visual impact put it in a class with the Pyramids, Machu Pichu and the Taj Mahal. The temples of the Angkor area number over one thousand, ranging in scale from nondescript piles of brick rubble scattered through rice fields to the magnificent Angkor Wat, said to be the world’s largest single religious monument.

Taj Mahal is another ancient site that continues to lure travelers in Asia into its midst. Located in Agra, India, the temple was made by the Mughal emperor Shah Jahan as a mausoleum for his favorite wife Mumtaz Mahal (Jewel of the Palace) who died in childbirth after bearing him 14 children.

Bangkok, Thailand is another travel spot in Asia. One of its most popular tourist destination is the Wat Pho or the Temple of the Reclining Buddha. Other destinations that would surely fascinate any traveler in Asia are the Wat Phra Kaeo (Temple of the Emerald Buddha), which is known as a example of 19th-century architecture; Buddhist temples; the Sanam Luang, where royal ceremonies such as cremation and the annual Ploughing Ceremony are often held; the Dusit Park, Zoo and the Chitladda Palace where the royal family reside. Bangkok is also home to numerous art houses such as the National Museum, National Theater, National Gallery, Rajadamnoen Stadium (the preeminent venue of Thai kick-boxing), National Library, and National Archives.

The Ambassador City Jomtien hotel in Thailand is a paradise away from home. Imagine a 40-acre beach singing waves of lullaby to you, mountains embracing you with green. All your anxieties are sure to vanish into thin air. You just need a ten-minute boat ride from Pattaya. If you crave for the city-way of relaxation and leisure, you need not worry about it. This is also a complex which has tennis and sports center, business service for those who need one and convention center for those who gather for assemblies, reunions, forums, and so forth. This hotel has the largest swimming pool in Asia and has a total of 5,100 guest rooms and suites.

The Philippines have also a lot to offer travelers in Asia. Its beaches and resorts can rival the world. Boracay, for instance, is known for its white sandy beaches and crystal clear water. Another island destination that any traveler to Asia should not dare miss is Palawan and Bohol, where the world famous Tarsier and Chocolate Hills can be found. Of course, one must also visit the Ifugao Rice Terraces, which is one of he Ten Wonders of the World as well as the Mines View Park and Strawberry fields in Baguio.

This site uses Akismet to reduce spam. Learn how your comment data is processed.